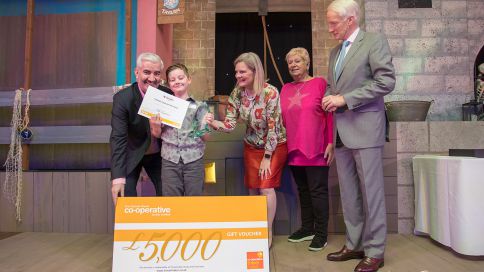 His Excellency and Lady Dalton attend the Variety’s Young Star of the Year Awards at the Radisson Blu Hotel on Sunday.

The devotion of Milo Baudains, a “one in a million” 11-year-old boy who helps care for his paraplegic mum, was recognised twice at the Variety’s Young Star of the Year Awards last night as he took home the ‘Young Star as Carer’ award, and was crowned the overall winner.

A total of twenty deserving youngsters were recognised for their achievements during the ceremony with awards acknowledging outstanding examples of courage, creativity, skill and selflessness.

The judging panel, which this year consisted of Lady Dalton, Charlie McArdle from the BBC and Malcolm Lewis, Chairman of Longueville Manor, said that Milo, “…truly deserved to be this year’s winner as he is a little boy who is so devoted to his Mum, and really is a Young Star!”

Milo’s mum is paraplegic after she broke her back in a horse riding accident in 1995, and she has used a wheelchair since then. Each day Milo, who has been described as sensible and caring for his age, helps her in any way he can. He gave up playing with his friends and going to Christmas parties two years ago after his mother fell and broke her hip, and instead he stays at home to look after her, and keep her company.

The Awards judges heard how, on one occasion when his mum fell from the car, Milo stopped her from hitting the floor, whilst also phoning his Dad for help.

Milo’s mum believes that he really deserves recognition for all the help he gives under difficult circumstances, and also for the day-to-day assistance he gives without a thought for himself.

Milo’s received his Awards as part of a ceremony at the Radisson Blu Waterfront Hotel on Sunday. Many other young Islanders were recognised at the event in categories such as ‘Young Star of Courage Age 6-10’, ‘Community’, ‘Sports’ and ‘Arts and Academia’. Winners of each category were awarded £500 worth of CI Co-op vouchers, while finalists were awarded £100 worth of vouchers. Sandra Auckland, Variety’s Chief Barker said: “Every year I am more and more amazed by the young stars of Jersey. The nominations are always so poignant and inspirational. This year, every finalist has demonstrated strength, hard work and dedication that is well beyond their years.

“This event is so important, not only to recognise their past achievements, but also to encourage their future aspirations. An event like this wouldn’t be possible without our sponsors. We are so grateful for their contributions, especially the Channel Islands Co-operative Society. I am also thankful to our judges, it’s always a difficult job because each story is so unique and heartfelt. As with every year, we encourage all the schools, clubs and associations to participate as I know there are still so many unsung heroes out there.”

Article from the Bailiwick Express