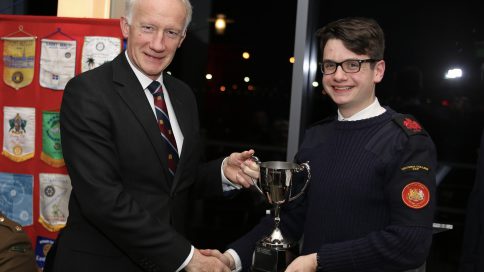 All of the Cadets made excellent presentations acquitting themselves with distinction and in doing so impressed His Excellency and the high calibre audience.  After much deliberation by the judging panel, which was made up of His Excellency, the Home Affairs Minister, Deputy Kristina Moore, the States of Jersey Chief Executive Mr Charlie Parker and the past president of the Rotary Club Mrs Tina Palmer, the eventual winner was declared to be Cadet Warrant Officer Nathan Le Blancq of the Victoria College Royal Naval Section.

The Jersey Rotary Club de la Marche Lieutenant-Governors’ Trophy was presented to Nathan Le Blancq by His Excellency who went on to thank the Rotary Club for hosting the event, he then paid tribute to all of the Lieutenant-Governor Cadets for taking part in the completion and for acquitting themselves with distinction.  This is the fourth time that this prize has being awarded and it is now established as an annual event.