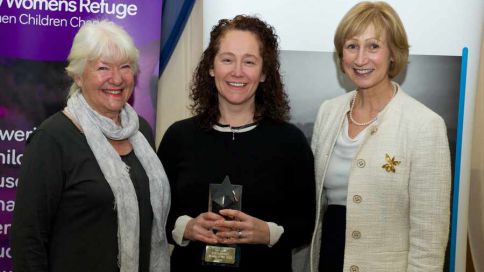 Lady McColl attended the International Women’s Day breakfast at the Radisson Blu hotel this morning. Melissa Nobrega the founder of Caring Cooks, a charity dedicated to encouraging Islanders to eat well together as a family has been named Jersey’s Inspirational Woman of the Year.

She was chosen from a shortlist of three, which included the Island’s most senior female police officer, Chief Inspector Alison Fossey, and After Breast Cancer support group chairwoman Cheryle Raphael, who has been battling against cancer for many years.

Over 200 people attended the breakfast which was held in aid of the Jersey Women’s Refuge, Lady McColl is patron. Nominations from members of the public were judged by Pat Sabey, chairwoman of Jersey Women’s Refuge, Jenny New, of Barclays, and Cassidy McIntosh, who set up Jersey Action Against Rape and was last year’s winner, chose the shortlist before selecting a winner.