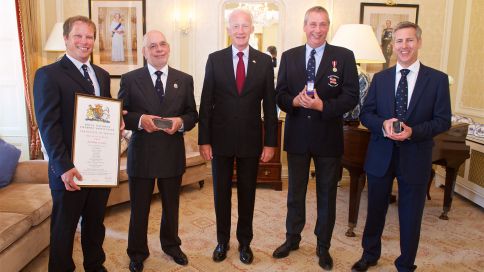 With 87 years of exemplary lifesaving between them, Jonathan Cornic, Chris McFadyen, Lloyd Banks and Helier de Veulle received awards from His Excellency at Government House. They were supported by their families and core members of the organisation’s management team in the island.

‘I was so proud to attend this ceremony which in every way reflected the volunteering ethos and longstanding service of the RNLI in the island. Every shout they attend to someone in trouble means that our crews may be risking their lives, and the dedication of those crew members and all our volunteers who play their part on the shore, has allowed us to save lives in Jersey for 134 years’.

‘I would like to make a special mention of the families of our volunteers. Their support allows those crews to go to sea, and their understanding and patience with the commitment involved is right at the heart of the RNLI. I am grateful to them every single day’.