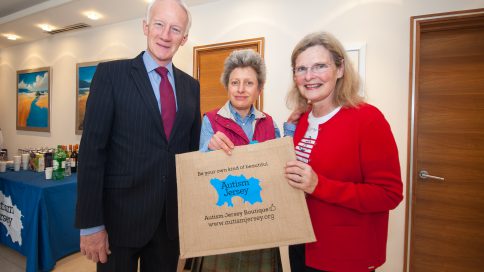 His Excellency officially opened Autism Jersey’s new office in Patriotic Place.  As the charity’s Patron he spoke about the importance of inclusion of people with autism in society, ‘and making sure that people who’ve got something to contribute to society have the opportunity to do so. Understanding how that contribution may be different is sometimes difficult for some of us to understand. But this is what Autism Jersey is doing brilliantly in terms of finding ways in which you can make it easier for people to understand, easier to include people in life and make it such that they benefit, and the whole of society benefits from it at the same time.’

His Excellency referred to his visit last summer, along with Lady Dalton, to Autism Jersey’s Holiday Club.

It showed, he said, what is typical of Jersey people who were ‘incredibly generous’. ‘If they can’t give money, they give time, and time is often more precious.’

The event was held on Monday 15 January 2018 in front of invited guests including clients, staff, trustees, families and supporters.

The charity moved last summer from premises in Britannia Place, Bath Street, which they had outgrown. The office is a new base where families can come for help, for service users to drop in, for a counselling service, and for training.

Speaking at the event, Autism Jersey chairman Nick Winsor said: ‘This is Autism Jersey’s fifth premises and these are by far and away the best. The facilities we have here will enable us to serve more people in better ways than we ever have before.

‘Our ultimate goal is to have a permanent facility for people on the autism spectrum. We’ve been working on this for a number of years and we’re not quite there yet but, as a temporary home, this is about as good as it gets.’