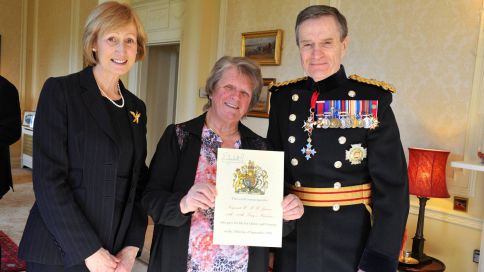 His Excellency presented Mrs Rosemary Dupré with the Elizabeth Cross and Memorial Scroll at a ceremony at Government House on Friday 26 February. Mrs Dupré’s father died while he was on active duty for the British Army in Cyprus in the 1950s.  Her father, Sergeant Wilfred Jepson, joined the 14th/20th King’s Hussars in 1946 and served as a drill instructor and later abroad in Korea and Cyprus. He died in the Cypriot town of Larnaca on 28 September 1956.

The Elizabeth Cross and Memorial Scroll was introduced by Her Majesty The Queen in 2009 and is granted to the next of kin of UK Armed Forces personnel who have died on operations or as a result of an act of terrorism.