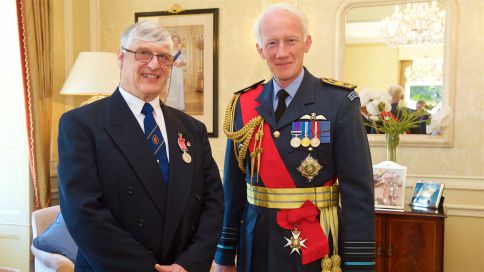 His Excellency and Lady Dalton hosted a reception at Government House for Stuart Elliott who received  the British Empire Medal for services to the community.

Stuart Elliott, from Jersey, is called out several times a week to deal with munitions left by the German occupiers in Jersey during World War Two.

The former Island policeman was selected for the post of bomb disposal officer in 1975.

Mr Elliott, 67, said the medal was an “absolute surprise” and he felt “privileged and delighted”.

Jersey was a German-held fortification during most of World War Two and there were an estimated 67,000 mines and 30,000 tonnes of munitions left behind.Mr Elliott is still called out two to three times a week to deal with munitions, most of which are leftovers from the occupation.