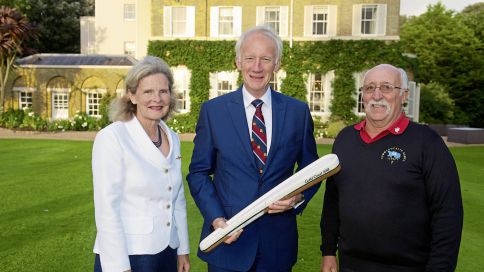 The Commonwealth Games Queen’s Baton Relay was in Jersey for 2 days with many lucky Islanders having the opportunity to hold this sporting symbol which is on its way to next year’s Gold Coast Games in Australia.   During its first full day in the Island it was presented to His Excellency and Lady Dalton which coincided with the Annual Air Display Reception that was being hosted at Government House.

During the baton’s two-day tour of the Island it also went to a number of other Island primary schools, the maternity hospital, Overdale, and Jersey Zoo. Gibraltar were next to host the baton.