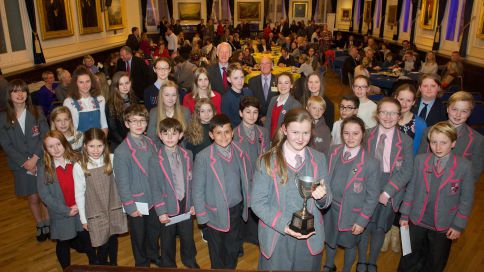 Prizes, of gift vouchers were presented by the His Excellency at a ceremony at the Town Hall. He also presented the Jersey Award Cup for the best entry by a Jersey student, which was won by Juliette Bale, a pupil of St Michael’s School.

She read her essay at the event which was also attended by Lady Dalton, members of the writers’ families and representatives of their schools and of sponsors Langham Hall Fund Management (Jersey) Ltd.

RCS Jersey branch secretary Dr Susan Taylor said it was a considerable achievement for Jersey students and schools to gain 36 awards in the competition, the theme for which was A Commonwealth for Peace.

Michael Talibard, a retired English teacher, judged the six gold award-winning entries and decided to give the Award Cup to Juliette.

The competition is the oldest and largest youth writing contest in the world and last year’s attracted more than 12,300 entries from 44 Commonwealth countries, about 25 per cent of which won an award.

There are two age categories, the junior category for school pupils aged under 14 years and the senior category for those aged between 14 and 18 years. Entries can be submitted as poems, letters, folk tales, scripts or essays.

Details of this year’s competition have recently been sent out to all schools.