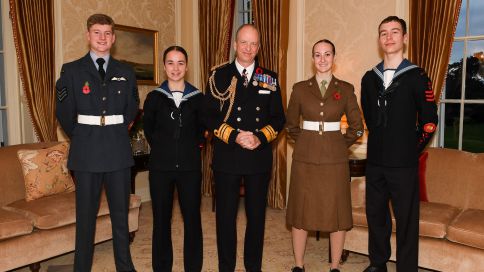 On Thursday 10 November 2022, His Excellency held a reception at Government House to present insignia and certificates to the Island’s newly appointed Lieutenant-Governor Cadets.

The scheme was introduced in 2013 and this is the 9th year that this prestigious award has been made.  After a stringent selection process, involving the entire Island’s cadet organisations, four cadets have been selected to be Lieutenant-Governor Cadets.  The cadets will assist and accompany His Excellency as he fulfils his ceremonial and civic duties.  They will also act as ambassadors for the Jersey Cadet movement.

Major Danny Wright, the Cadet and Military Support Officer said “All of the Cadet organisations have continued to wholeheartedly support this initiative and all of those nominated were first class candidates.  These Lieutenant-Governor Cadets are all outstanding young people, and they will be fine ambassadors for all the Jersey Island Cadets”

The Cadets selected are:

Monday to Friday 9am to 5pm